Skin conductance, Lie Detector, Limbic systems – who is in charge in human brain?

NB this is working text below … will be gradually updated and hopefully readable ..

“In 1849, Dubois-Reymond in Germany first observed that human skin was electrically active. He immersed the limbs of his subjects in a zinc sulfate solution and found that electric current flowed between a limb with muscles contracted and one that was relaxed. He therefore attributed his EDA observations to muscular phenomena.[6] Thirty years later, in 1878 in Switzerland, Hermann and Luchsinger demonstrated a connection between EDA and sweat glands. Hermann later demonstrated that the electrical effect was strongest in the palms of the hands, suggesting that sweat was an important factor.[7]

Vigouroux (France, 1879), working with emotionally distressed patients, was the first researcher to relate EDA to psychological activity. In 1888, the French neurologist Féré demonstrated that skin resistance activity could be changed by emotional stimulation and that activity could be inhibited by drugs.[7]

In 1889 in Russia, Ivane Tarkhnishvili observed variations in skin electrical potentials in the absence of any external stimuli, and he developed a meter to observe the variations as they happened in real time.[8][9]

The scientific study of EDA began in the early 1900s. One of the first references to the use of EDA instruments in psychoanalysis is the book by C. G. Jung entitled Studies in Word Analysis, published in 1906.[10][11] Jung and his colleagues used the meter to evaluate the emotional sensitivities of patients to lists of words during word association.[12][13] Jung was so impressed with EDA monitoring, he allegedly cried, “Aha, a looking glass into the unconscious!”[14] Jung described his use of the device in counseling in his book, Studies in Word Association, and such use has continued with various practitioners.[15]

The controversial Austrian psychoanalyst Wilhelm Reich also studied EDA in his experiments at the Psychological Institute at the University of Oslo, in 1935 and 1936, to confirm the existence of a bio-electrical charge behind his concept of vegetative, pleasurable “streamings”.[16]

By 1972, more than 1500 articles on electrodermal activity had been published in professional publications, and today EDA is regarded as the most popular method for investigating human psychophysiological phenomena.[17] As of 2013, EDA monitoring was still on the increase in clinical applications.[18]

Lie detector?
“The history of research into psychophysiological measurements as an aid to detecting lying, widely known as the ‘lie detector’ or polygraph, is the focus of this review. The physiological measurements used are detailed and the debates that exist in regards to its role in the investigative process are introduced. Attention is given to the main polygraph testing methods, namely the Comparative Question Test and the Concealed Information Test. Discussion of these two central methods, their uses and problems forms the basis of the review. Recommendations for future research are made specifically in regards to improving current polygraph technology and exploring the role of the polygraph in combination with other deception detection techniques.” https://www.tandfonline.com/doi/full/10.1080/23744006.2015.1060080

Men “The Truth About Lie Detectors (aka Polygraph Tests) – https://www.apa.org/research/action/polygraph men “there is no evidence that any pattern of physiological reactions is unique to deception. An honest person may be nervous when answering truthfully and a dishonest person may be non-anxious. Also, there are few good studies that validate the ability of polygraph procedures to detect deception. As Dr. Saxe and Israeli psychologist Gershon Ben-Shahar (1999) note, “it may, in fact, be impossible to conduct a proper validity study.” In real-world situations, it’s very difficult to know what the truth is”.

More before proceeding: Skin conductance has been regarded as pure sympathetic related measurement, but as it has acetylcholine as transmitter when noradrenaline is the usual transmitter, it can be questioned to some extent. The concept of arousal discussed (https://en.wikipedia.org/wiki/Arousal) is discussed at least since the middle 1900-ies and is one of the most used parameters in psychophysiology.  As it is often connected with emotional behaviors, it is out of a biological evolutionary perspective associated with mammalian (called in humans for Limbic system) brain 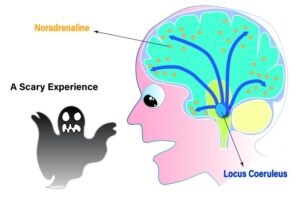 Structures of the brainstem, the origin of the arousal system, viewed along the sagittal plane. Picture left https://sitn.hms.harvard.edu/flash/2018/mysterious-fear-learner-locus-coeruleus/

It concerns even older parts of our brain, the brainstem, particularly Locus Coeruleus, LC (The Locus Coeruleus- Norepinephrine System in Stress and Arousal: Unraveling Historical, Current, and Future Perspectives – https://www.frontiersin.org/articles/10.3389/fpsyt.2020.601519/full “Arousal may be understood on a spectrum, with excessive sleepiness, cognitive dysfunction, and inattention on one side, a wakeful state in the middle, and hypervigilance, panic, and psychosis on the other side. However, historically, the concepts of arousal and stress have been challenging to define as measurable experimental variables. Divergent efforts to study these subjects have given rise to several disciplines, including neurobiology, neuroendocrinology, and cognitive neuroscience. We discuss technological advancements that chronologically led to our current understanding of the arousal system, focusing on the multifaceted nucleus locus coeruleus.”

LC is particularly interesting while it relates to SAM (https://en.wikipedia.org/wiki/Sympathoadrenal_system), that is complex different evolution of systems with sympathetic related functioning.

In complex SAM related mental dysfunction, e.g. PTSD, LC can be reactivated after REM pronounced with hypertension as a consequence as well as waking up with panicking

Then I jump much to day, where I will present a probably new perspective based on knowledge development in many different fields I have been able to find in trying to understand the complexity of homo sapiens and the evolution until human brain.

Straight to the point;
Based on my paradigm:
When considering the evolutionary interplay last (around) 300.000 years when the real development of today human brain were evolved from/out of/in interactions with Limbic (mammalian) systems, we can try (!) to image (Limbic activity in our brain) how such an interplay was developed gradually during those 300.00 years until now. Providing civilized (?) male/female with such not evolution but last centuries with an exploding revolution, which we can call cultural evolution (humanism (?), techniques, not to forget knowledge developed such as quantum physics/biology/medicine … while still the biological evolution try to keep on/hold out …

Now to the head line point
Lie detector was believed once (https://en.wikipedia.org/wiki/Electrodermal_activity and https://www.apa.org/research/action/polygraph) to “tell the truth” but instead in may (still a hypothesis!) may be associated with relations between an individual´s (a) Limbic memory construct cluster (see … ), may be really unconscious as Jung above thought and (b) neocortex, rational, conscious thinking. That’s is, a positive or negative interaction/correspondence.

If so, what is the use with skin conductance? It could be overwhelming when we think about cognitive dissonance (Festinger, https://psycnet.apa.org/record/1993-97948-000) and all what can be connected with this in mental dysfunctions from PTSD to every day biopsychosocial stress.

We can furthermore investigate our own thinking to see how our own construct systems (Kelly, 1955) is working.

More, when we are unsure of whether we are suffering from PTSD imitated fir year in life or a present traumatic event, I am not sure, this above, will work WHILE a complex PTSD is most always there .. that is influencing goings-on – in an kind of state dependent reconsolidation (learning) influencing the present – if we have not manage to “free ourselves from to be a slave under our personal history” (Kelly, 1955 – see e.g. https://uk.sagepub.com/en-gb/eur/george-kelly/book203504 or my writings)

The problem with severe PTSD is that this Limbic memory construct cluster intervene with most goings-on, which is while “normal” biopsychosocial associated stress reactions often are enlarged/magnified .. which means that the PTSD construct cluster is part of most stress related (preferably Limbic) reactions

More is to come …